I was born in 1974, in Northumberland, which is possibly the one part of England where more animals live than people.

My father Paul worked for the family engineering business in Newcastle, while my mother Jane ran a children’s bookshop in Hexham called Toad Hall Books. Alongside my younger brother Nick, I spent my very early years crawling around on the floor of that shop, surrounded by piles of books right from the start.

I was extremely lucky to come from a writing background. My grandfather Roger Mortimer was a racing journalist who wrote hundreds of very funny letters to his children and grandchildren, and you can learn the extraordinary story of his life in Dearest Jane, by him and my mother, Jane. 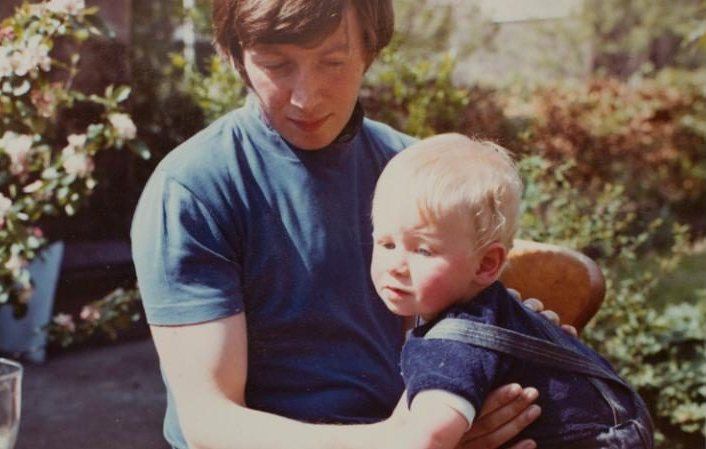 My dad Paul, helping me reach for some toast

I enjoyed reading, writing and drawing from an early age. My parents loved reading to me, and I particularly enjoyed books with good pictures – such as the Moomin stories by Tove Jansson, The Hobbit by J R R Tolkien and Hergé’s Tintin graphic novels. Other favourites included Roald Dahl, C. S. Lewis’s Narnia series and Wind in the Willows by Kenneth Grahame. My mother was always writing as I was growing up – newspaper articles, gardening and cookery books, local history – and it seemed a normal thing to want to do.

My first cartoon, aged 7,  was about a superhero called Super Sid, which won a competition in a local newspaper. I started making comics, and my first one was about all the sheep who lived on the hills around us, called…The Sheep! At school I spent most of my time in the library or the computer room, writing plays, short stories and funny articles for the school magazine.  After that I went to university, where I was meant to study English Literature but mainly wrote, directed or produced plays and comedy shows.

My first job, in 1996, was in a fringe theatre in London, The Pleasance, where I started working behind the bar but was eventually allowed to read a few scripts and then help choose what plays were put on, both in London and at their Edinburgh Fringe Festival venue.  I was very fortunate to be a Trustee for the last 15 years.

Then I co-ran a theatre production company, touring new plays and promoting comedians. I also worked in TV for several years, for independent production companies such as RDF Media, Tiger Aspect and Talkback, including a short spell in Los Angeles, coming up with ideas for everything from reality shows to hidden camera pranks.

On a break between TV jobs one summer in 2008, I booked myself onto an Arvon writing course at Ted Hughes’s old house on the West Yorkshire moors, and it was there I began writing the adventures of a boy called Kester who can’t talk to people but can talk to animals, in an environmentally precarious world.

That same year, I married Will Tosh, who is Research Fellow at Shakespeare’s Globe in London.

In 2014, the sequel to The Last Wild, The Dark Wild,  came out, and won the Guardian Children’s Fiction Prize. The third and final book in the series, The Wild Beyond came out in 2015, and was shortlisted for Islington Book of the Year.

After my father died in 2013, I found his last unfinished novel (a political thriller for adults) amongst his papers. With the agreement of my brother and his agent and editor, I finished the book for him , and The Death of an Owl was published in 2016 by W&N.

That Christmas, my fourth book for children,  There May Be A Castle was published by Quercus Children’s. It was a Children’s Book of the Year in The Times.  You can also read some new short stories by me in Winter Magic (curated by Abi Elphinstone), Wisp of Wisdom, Scoop magazine and Return to Wonderland, a tribute to Alice in Wonderland.

I also occasionally write articles and book reviews for The Guardian, The Daily Express and The Spectator, amongst others. I have judged the Guardian Children’s Fiction Prize, and the Costa Book Award. In 2018, with my brother Nick, I co-founded the Paul Torday Memorial Prize for Debut Authors over 60, in collaboration with the Society of Authors, first awarded to Anne Youngson for Meet Me at the Museum in 2019.

Like many writers I also spend a lot of time teaching writing as well as doing it, and am a regular speaker at schools both here and abroad, and at festivals and conferences. I speak to children about reading and writing, and also to teachers and educators about their practice at CPD events. I occasionally teach adults to write for children, at  Writers and Artists Masterclasses, Arvon, SCWBI and the Emirates Literature Festival, amongst others.

My adaptation of John Masefield’s classic The Box of Delights opened at Wilton’s Music Hall in London in Christmas 2017, directed by Justin Audibert, designed by Tom Piper, starring Matthew Kelly and Josefina Gabrielle and was revived in Christmas 2018 starring Theo Ancient (Harry Potter and the Cursed Child).

I am now delighted to also be an Associate Artist at Wilton’s.

I am passionate about the opportunities for imaginative futures that reading allows, and have been a trained Reading Helper with Coram Beanstalk for five years, working with children on their reading on my local primary schools.

I am delighted to be Patron of Reading for Croxteth and Garston Primary schools in Liverpool, and am a Trustee of the Ministry of Stories, a charity which works with children in East London and further afield to enable their creativity and storytelling skills in multiple different forms, and the Unicorn Theatre, the UK’s leading theatre dedicated to producing work for young audiences.

I am also a Patron of the magnificent Shrewsbury Book Fest, a visionary book award, festival and school outreach scheme all in one.

My latest book series is Narnia inspired, beginning with The Lost Magician. Published in September 2018, it won the Teach Primary Award 2019. The sequel, The Frozen Sea, came out in September 2019. My latest play is a retelling of the Charles Dickens festive classic, Christmas Carol, which featured the first ever female Scrooge on the English stage. It opened at Wilton’s Music Hall in December 2019, directed by Stephanie Street, designed by Tom Piper, with Sally Dexter playing Fan Scrooge.

I am currently also working on a new book, play and film, but spend most of my time wrangling our very naughty – but adorable – puppy, Huxley. 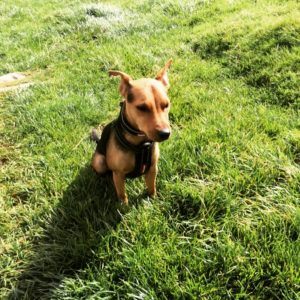 I an delighted to be a Trustee of The Unicorn, the UK’s leading theatre for young audiences, producing an eclectic and surprising programme of work year-round for children aged 6 months to 18 years.
Based in our purpose-built home at London Bridge, we aim to connect artists and audiences through a broad range of work that is honest, refreshing and international in outlook, across a range of disciplines.We present and tour around twenty shows each year, at home and abroad, to around 90,000 children and their parents and carers, and work extensively with schools and in the community to invite children from all cultures into a conversation about art and the world we live in.
As a registered charity we need ongoing support from our audiences to help us raise £500,000 each year. We are committed to creating high quality work that is accessible to all, regardless of circumstance and background. This is why we offer 10 percent of our tickets free, or heavily subsidised, enabling everyone to enjoy our shows. Please support us to continue this vital work.
MORE >

Shrewsbury Bookfest was founded in May 1999. It was at the time the only exclusively children’s literary festival in the country. Since then, Bookfest has grown considerably, developed new projects and has established a fine reputation for excellence amongst authors, publishers and keen supporters.

It obtained charitable status in 2007, and in 2009 won a Queen’s Award for Excellence in the Voluntary Sector – the equivalent of an MBE and the highest award that can be given to a voluntary organisation.

Shrewsbury Bookfest has always been an independent, not-for-profit organisation, governed by a non-executive Board of Trustees. The Committee is primarily made up of a group of dedicated, hard working volunteers who collectively put in hundreds of hours to deliver continually evolving and successful reading development projects.

The Last Wild was shortlisted for the Shrewsbury Book Fest Award in 2014, and I have worked with the Festival since on school visits or supporting their work in other ways, and I am delighted to now be a Patron of this inspiring Festival, alongside Martin Brown and Ian Whybrow, with our President Jacqueline Wilson.

To find out more or support the excellent work they do, please follow the link below.

The Ministry of Stories

The Ministry of Stories is a local writing and mentoring centre in east London, where anyone aged eight to 18 can come and discover their own gift for writing. It lives in a secret space behind the fantastical Hoxton Street Monster Supplies.

Through a range of innovative writing programmes, and one-to-one mentoring, The Ministry helps young people discover and realise their own creative potential. It builds confidence, self-respect and communication skills in both workshops for schools and out-of-school writing clubs. And they provide a publishing platform for young writers, so these fresh, exciting voices are shared with the world.

I’m delighted to have joined as Trustee and look forward to helping them in their mission to make writing fun and accessible, and help young people find their voices. If you would like to support the Ministry’s work, or even get involved yourself, click on the link below

Coram Beanstalk is a national charity that provides one-to-one literacy support to children who struggle with their reading ability and confidence. They recruit, train and support volunteers to provide consistent, one-to-one literacy support to primary school children who need our help. Those trained reading helpers give them the support they need to improve their reading ability and confidence.

I am very lucky and proud to have been one of those volunteer reading helpers since 2012, working with children in Islington and Haringey. Our regular sessions are a highlight of every week. Volunteering with Beanstalk not only helps children who need it the most, but you can get so much out of it too, and I learn something new with every visit.

To find out how you could volunteer with Beanstalk or support their work in other ways, please follow the link below.

Find out more about my school visits, or where you can come and see me at a festival or bookshop near you.

What inspired you to write The Last Wild?

I was inspired to write The Last Wild by the shocking discovery that Earth has lost over 60% of its wildlife in the last 40+ years. What will happen in the next 40 years. Will there be any animals left, and if not, what are we going to do about it? What are YOU going to do about it?

Do you visit schools?

Yes. As I am based in London, most of my visits take place in the Southeast. But budget and time permitting, I do try and visit as many schools across the UK as I can. For more information on how to arrange a visit, the sessions I offer, and fees, please contact:

Will there be another book in “The Last Wild” series?

Not for the time being. “The Wild Beyond”, the third book in the series, is the conclusion of Kester, Polly, Aida and all their animal friends’ adventures as I see it for now. I firmly believe that those left at the end of that story have very exciting futures ahead of them! But never say never. There might be a fourth book one day, you never know…