There May Be A Castle 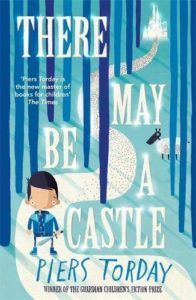 Eleven-year-old Mouse is travelling to see his grandparents on Christmas Eve with his mother and two sisters. But it’s snowing, and visibility is bad, and the car goes off the road, and crashes.

Mouse is thrown from the car.

When he wakes, he’s not in his world any more. He meets a sheep named Bar, who can only say Baaa, and a sarcastic horse named Nonky, who is a surprising mix of his beloved toy horse and his older sister.

So begins a quest to find a castle in a world of wonder – a world of monsters, minstrels, dangerous knights and mysterious wizards; a world of terrifying danger but also more excitement than Mouse has ever known.

But why are they looking for a castle? As the cold grows, we realise it might just have something to do with the family he’s left behind; and that Mouse’s quest is more important than ever.

“The new master of children’s books”

“If you were to dislike this book, I would not be your friend!”

“An outstanding book and a future classic”

“Not many books change readers’ view of the world – this might be one of them.”

“Proves that stories really matter. They really do.”

“Another fantastic tale from Piers Torday and not one to miss”