The Box is Back! 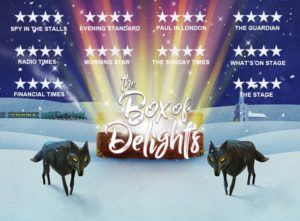 Watch out, because those wolves are running again…

It is with splendiferous pleasure that I announce that, following our sold out, critically acclaimed four star run at Wilton’s Music Hall last year, my adaptation of  John Masefield’s The Box Of Delights is back by popular demand for a limited run of 45 performances.

Based on the much–loved and critically acclaimed festive children’s classic by Poet Laureate John Masefield, a direct forerunner to Narnia and Harry Potter, known to many through the legendary BBC adaptation. You can now experience the enthralling wonder of Masefield’s world for yourself, from flying cars to fiery phoenixes.

Once upon a time, there were two great sorcerers, Ramon Lulli and Arnold of Todi. To decide who was the most powerful, they made a wager. Who could invent the most incredible magical power, never seen before?

After a year, Ramon returned with an elixir, which would grant the drinker eternal life. But then Arnold revealed his invention .
A box of his own invention. A mysterious and wondrous Box of Delights, with dark powers.
Before Ramon could respond, Arnold disappeared, taking his Box with him.
Now centuries later, a boy on a train travelling home for the holidays, is about to be drawn into an ancient magical struggle, that will see him fighting not just for his life, but to save Christmas itself.
Watch out, Kay Harker, for the wolves are running…
Tags:John Masefield/The Box of Delights/Wilton's Music Hall