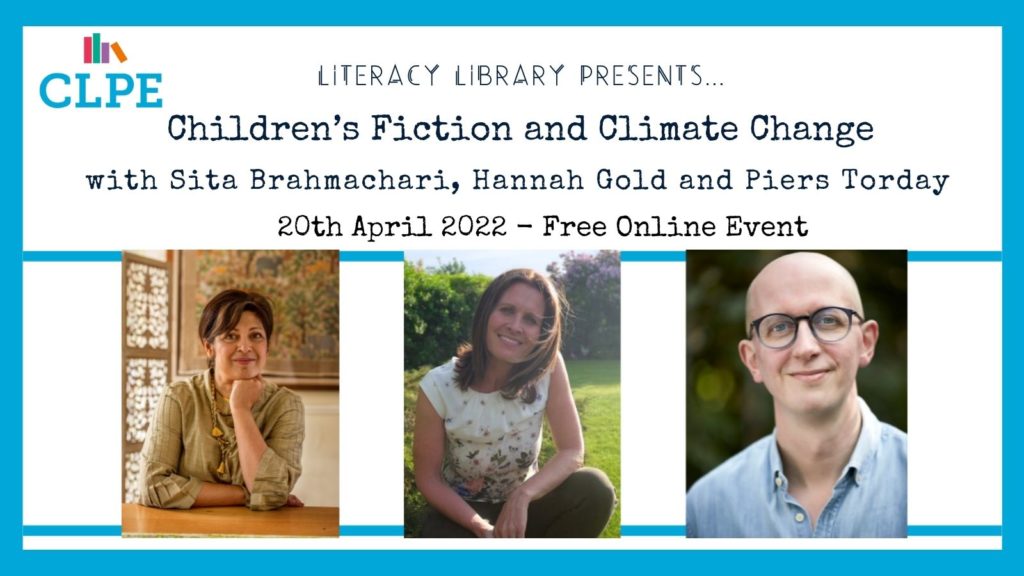 To coincide with Earth Day 2022, CLPE is thrilled to be hosting a very special online panel discussion featuring three acclaimed children’s authors – Sita Brahmachari, Hannah Gold and Piers Torday – on climate change in children’s books. Drawing on their own novels, these authors will discuss how to tell stories that will lead the way to a better future, and inspire climate education in schools.

The conversation, led by CLPE’s Librarian Phoebe Demeger, will cover such topics as:

There will also be an opportunity to ask your own questions of our panellists.

We have partnered with Peters to offer an exclusive discount on Hannah, Piers and Sita’s books. Head to Peters to use this discount.

Hannah Gold: Hannah Gold worked in the film and magazine industries before taking time out to pursue her dream of writing. The Last Bear, published by HarperCollins Children’s Books, is her middle-grade debut which became an instant classic and international bestseller on release in 2021. It was shortlisted for both the Waterstones Children’s Book Prize & the Blue Peter Book Awards, nominated for the CILIP Carnegie Medal as well as being The Sunday Times Children’s Book of the Week.

Piers Torday: Piers began his career in theatre and then television as a producer and writer. His bestselling first book for children, The Last Wild, was shortlisted for the Waterstones Children’s Book Award and nominated for the CILIP Carnegie Medal as well as numerous other awards.

Sita Brahmachari: Sita won the Waterstones Children’s Book Prize with her debut Artichoke Hearts and is one of the most interesting and important voices in children’s books today. Tender Earth was awarded an honour by the International Board of Books for Young People, and her most recent novel, Where The River Runs Gold, published to great acclaim in July 2019.