Box of Delights is “Best Christmas Show in town!” 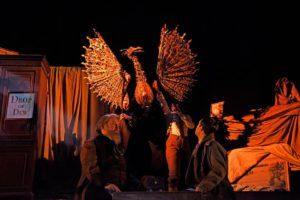 The Box of Delights has been re-opened at Wilton’s Music Hall for another year, and the response has been extraordinary.

Attitude have called it “the best Christmas show in London” in their five star review, and the production was also one of The Observer’s ‘Top Christmas Shows of 2018’, describing it as a “cultural highlight.”

In fact, we’ve had a clean sweep of festive show critical picks:

& critics choice in THE TELEGRAPH and INDEPENDENT!

So what are you waiting for?

The wolves are running, if you can stand their bite…. book today!