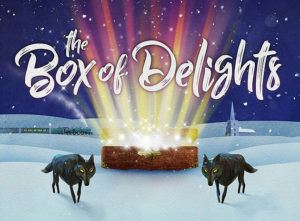 ‘John Masefield’s The Box of Delights is one of the true classics. It has all the magic, adventure, threat, enchantment & excitement of the best tales for children of all ages. I remember wriggling with pleasure when I first read it and I couldn’t be more excited that such a talented team is bringing it to life for a new generation – and at Wilton’s – wonderful!’

I am delighted to tell you that Wilton’s Music Hall (the oldest music hall in the world), has invited me to adapt the former Poet Laureate John Masefields’ Christmas classic, The Box of Delights, for the international stage premiere this festive season. (30th December 2017 – 6th January 2018).

I grew up on this story, both in book form and the wonderful BBC TV adaptation, and it has been a thrill to bring it to life for a whole new audience. Full of enchanting stage magic, here is a reminder of why this is one of the best Christmas tales ever…

Kay Harker is on the train home from school for the holidays. But this Christmas will be different. His parents are dead, and the wolves are running… He meets an aged magician, Cole Hawlings, who charges him with protecting his wondrous Box of Delights, a device of great power. But when the old man mysteriously disappears, Kay faces the fight of his life to protect the Box, and with it, the people he loves. For Cole’s nemesis, the wicked sorcerer Abner Brown will stop at nothing to get his hands on the Box.

For me, The Box of Delights is a magical and festive adventure like no other in which one boy must enlist the help of the heroes of the past, to defeat the evil in his present. The very future of Christmas itself depends upon him…

I’m very excited to be working with an incredible team. The show will be directed by Justin Audibert (Royal Shakespeare Company; National Theatre), designed by Tom Piper (Olivier-Award winning and designer of Blood Swept Lands and Seas of Red poppy installation at the Tower of London), with movement direction from Simon Pittman. Lighting is by Anna Watson, sound and music by Ed Lewis, and video by Nina Dunn.

Tickets are now on sale, with some limited but special offers for schools and group bookings still available.

It’s going to be a magical winter – hope to see you there!